Week 1: Minehead-Barnstaple 'On the Path' Day 5 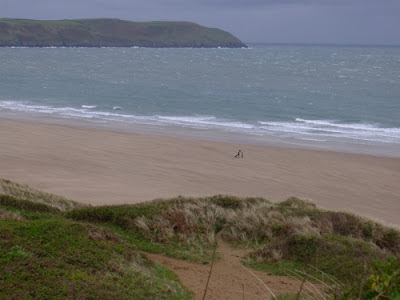 Forecast was for force 8, gusting 10; so decided it was too dangerous to go round Baggy Point. Walked the length of Woolacombe Beach, amazing patterns formed by wind blown sand, then took a short cut through the lanes to Croyde where it started raining hard. Unable to work and not wanting to get soaked we bussed it to Braunton for lunch.
After the rain we walked out to Vellator (old port) and further down river but it was still very windy and uninspiring. 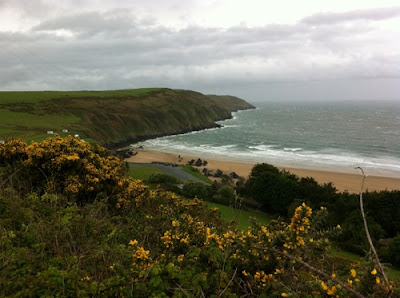 Today was a wash out, no sketching and too dangerous to go near the edge.  We will return for a day walk around Baggy Point later in the year. Considering the awful weather that we had all week, I am still really pleased with the work that I have done.

Next blog entry will be from the studio.
Posted by Anita Reynolds at 20:54 1 comment:

Week 1: Minehead-Barnstaple 'On the Path' Day 4 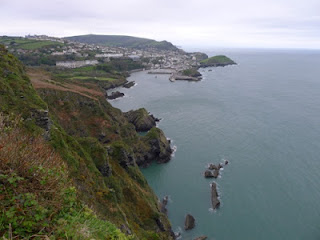 
Stopped for second breakfast in Ilfracombe at Adele's Cafe featuring Ted the dog. 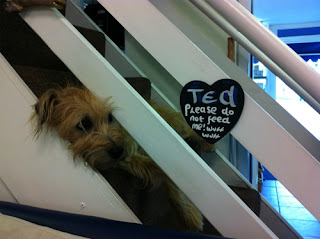 Failed to buy any food as all the shops in lower Ilfracombe are full of touristy stuff and do not sell anything you really need (unless you are a tourist!)

Very cold and windy so got fully togged up in the lee of the theatre that looks like a couple of lime kilns - seems oddly out of place in a seaside town like Ilfracombe.

Walked to Lee Bay across open grass - more like a golf course than a coast path, very different from yesterday. Feeling stiff and weary, especially thighs and calfs - my knee is giving me quite a lot of trouble today. Stopped on the beach for porridge made with hot chocolate - yummy!

Stopped to sketch near Sandy Cove to the east of Bull Point, sitting in lee of wall but still wearing 4 layers and, in my case, 3 hats! When concentrating on the physical aspects such as being tired and cold - it is sometimes difficult to maintain focus on the artistic elements of the project.

It is amazing how quickly the days go - even simple tasks like taking documentary photographs and writing notes sometimes just get forgotten. 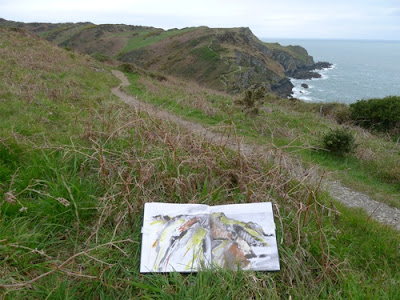 Very pleased with this sketch - best so far, just getting into the swing of it and the week is nearly over!
Posted by Anita Reynolds at 20:54 No comments:

Week 1: Minehead-Barnstaple 'On the Path' Day 3

Tried to catch the Fernicular railway from Lynmouth, but we were too early - could not wait until 10 o'clock so had to walk the 500 feet up to Lynton.
Walked out to Castle Rock past feral goats. Whilst painting Castle Rock I found that sketchbook pages blowing about are a real pain (should have remembered the elastic bands). 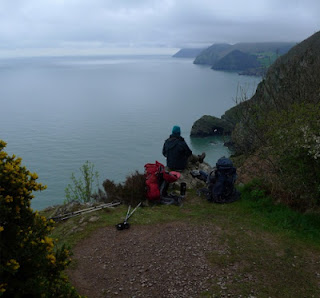 After initial slog uphill from Lynmouth we felt pretty good this morning - could it be that our legs are getting fitter. Still a long way to go though - might be finishing in the dark today. Stopped to sketch just after Woody Bay, looking down at arch rock near Wringapeak.

We came across evidence of vandalism at Heddon's Mouth - three coast path signs deliberately smashed; later we found a gate off it's hinges near North Cleave - we replaced it (just hope it wasn't the farmer that removed it!). 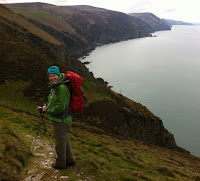 Stopped for lunch in the sunshine high on the cliffs of East Cleave, just after Heddon's Mouth. The sea was an amazing range of colours, from turquoise to purple.

Stopped to sketch a hawthorn and rest feet below Trentishoe Down.

Down to Sherrycombe for a cold but refreshing foot-bath and water refill. We tried to save time by not removing the bladder from the rucksack; not being able to see we overfilled the bladder and when the tube was removed it created a geyser!

The last hill of the day was the ascent of Great Hangman, very steep at start (strained muscles all round). At 1,043ft (318m) this is the highest point on the whole coast path and we reached it just in time to take some superb photos of the setting sun from the top. 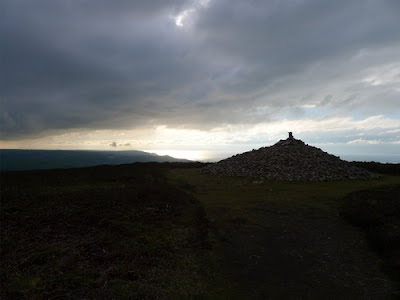 On the way down near Little Hangman we passed many black lambs with white spots on the top of their heads, they were getting very bouncy as we passed. The long and tiring walk down to Coombe Martin was followed by a long and tiring walk up the high street (apparently the second longest in England), but the B&B at Trenode House (thanks Rita) was worth it.
Posted by Anita Reynolds at 18:58 No comments:

Week 1: Minehead-Barnstaple 'On the Path' Day 2

Then into the woods, via the Worthy Combe Toll Road, and onto Culbone with its tiny church - said to be the smallest active church in England. 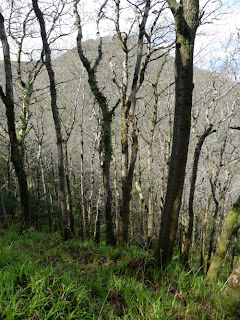 It is great to be walking unencumbered by waterproofs - hoods rob you of peripheral vision and the noise made when walking excludes all other noises. Also, good to be walking in the sun this morning in just a tee shirt (and trousers and boots!), listening to the sea and the birds and nothing else.
If yesterday was characterised by rain then today has been all about trees. However, the invasion of rhododendrons on the cliffs above Glenthorne Beach is truly awful - all other species of plant have given up.

Stopped for a late lunch at Sisters Fountain (said to have been visited by Joseph of Arimathea) and used the water filter for the first time - very tasty results, much better than tap water.


The walk seemed to go on for a long time today, various signs giving distances to Lynmouth were quite misleading - they have long miles around here. 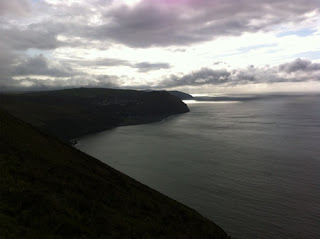 The evening view from Foreland Point (most northerly point in Devon) made it all worthwhile.
Bumped into a lovely German couple (Klaus and Susan) who we first saw in the Bossington tea shop yesterday. Ended up in the same B&B and having dinner together this evening.
Spent the night at River Lyn View (thanks Carol and Ray Sheppard) and ate in the Village Inn - really good local burgers and an excellent pint of Tribute.
Posted by Anita Reynolds at 18:59 No comments:

Week 1: Minehead-Barnstaple 'On the Path' Day 1 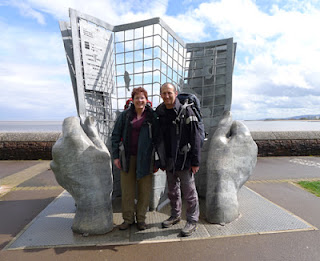 
Arrived in Minehead after a long trip up by taxi, train and bus. Visited the Jubilee Cafe for a curiously wedge-shaped steak and ale pasty (thanks Val and Steve).

Took photos at the monument (designed by Sarah Ward, created in bronze by Owen Cunningham) marking the start of the path in sunshine - it didn't last long. We were in full waterproofs for the rest of the day but still managed to sing happy rain songs.
Passed two chaps just finishing the walk and chatted to a young guy who had been camping and waiting for good weather to start the path for 3 days.

In one of the few dry spells (about 20 minutes) we arrived at the very pebbly Porlock beach; it even has pebbly WWII pill boxes. Some of the pebbles are spotted with lichen - they have been there for 8000 years so it's not surprising. Got some good photos before the rain started again. Headed for the tea room in Bossington for shelter and an excellent cream tea. 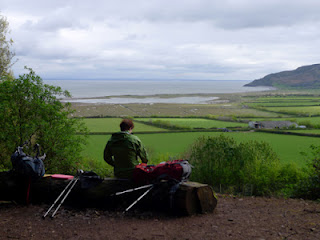 Although it rained most of the day it was warm and not too windy, thankfully the waterproof clothing and rucksack covers worked perfectly.


Final stop of the day was a viewpoint overlooking the salt marshes behind Porlock Ridge.  These were created in 1996 when the Ridge was breached during a storm.
We spent the night at The Cottage B&B in Porlock (thanks Angela & John).


We decided to B&B all this week because of the bad weather forecast.  From week 2 onwards we will be camping.
Posted by Anita Reynolds at 21:10 No comments: After many months of dreaming, planning and training the big day has finally arrived.  At noon on Wednesday 25th April we will depart from Minehead and walk up into the Exmoor National Park on day 1 of what promises to be a very creative experience.


Over the next 6 days we will travel nearly 70 miles, out of Somerset and across the top of Devon, finishing in Barnstaple.


Deciding what art materials to take has been driven mostly by weight and ease of use. I will be taking: 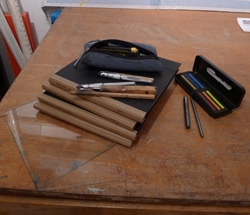 
Finally, a big thank you to all that have sent messages wishing us good weather, fit legs and a fair wind!
Posted by Anita Reynolds at 18:22 1 comment: 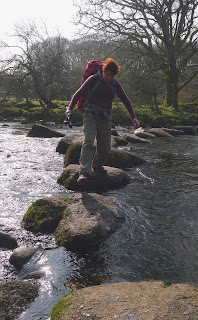 I will be accompanied on the walk by my partner Tim, who will help to carry the gear and organise communications and camping.  My friend Vicky Maxwell is helping to publicise the project and will run 'walk HQ' whilst we are on the path.


We have been training, mostly on Dartmoor, over the last few months to prepare for the daily average of 12 miles and 2000 feet of ascent and descent that we need to achieve.

A training weekend in late March: 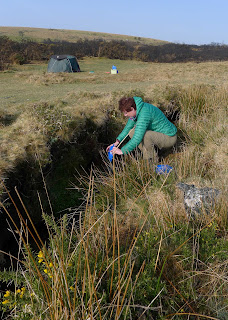 Camping on Dartmoor. Tried out the new tent and sleeping bags. The night sky was amazing. Don't always believe what labels say, our bags were supposed to be good to -2ºC, it was around 0ºC and we were freezing, we both had to sleep with duvet jackets and hats on! 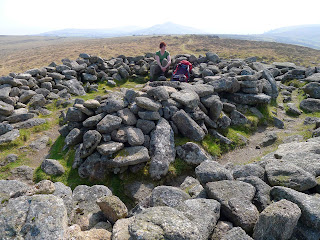 We huffed and puffed from Combestone Tor to Yar Tor and back via Dartmeet with fully loaded rucksacks in beautiful sunny weather, a good first trip out with all of the gear.

Posted by Anita Reynolds at 10:09 No comments: 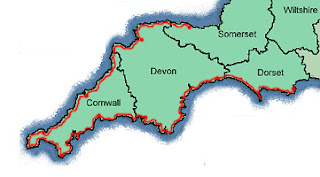 From 2012 to 2014 I will be walking the South West Coast Path which runs from Minehead in Somerset  to Poole in Dorset.  The 630 mile trail contours its way through four counties, has 115,000 feet of ascent (and descent) and should take about 60 days. 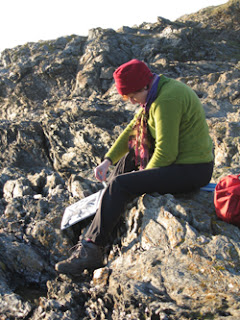 I will complete the walk in one week blocks with two or three week breaks back in the studio.  I will be sketching en-route and aim to produce a drypoint plate for each day of the walk. This will result in a body of work made up of about 60 drypoints expressing my response to the landscape. 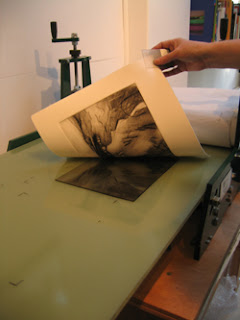 A drypoint print is made by scratching into an acetate sheet using a sharp point.  Printing ink is applied to the plate which is then put through an etching press to transfer the image onto paper.

Once the prints are complete I aim to tour them, with additional larger works, around selected South West galleries.

An exhibition of work from the first half of the walk (Minehead to Penzance) took place at the Devon Guild of Craftsmen in early 2013 and again at Harbour House, Kingsbridge in September. Selected works were also exhibited at the Cotehele National Trust Gallery in the middle of the year.

The first exhibition of work from the second half will take place at the Devon Guild from 25 September to 16 November 2014.
Posted by Anita Reynolds at 09:42 No comments: