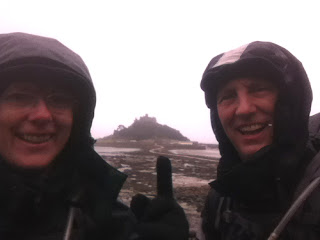 Word of the day: Slippery
Penzance to Praa Sands


On the train at 0740, met in Penzance with rain and strong feelings of déjà vu. Took an open-top bus to Marazion - probably would have been dryer walking the sea wall as every time the bus braked or turned a corner we were showered with water from the upper deck (the bus broke down as we got off in Marazion!) Passed a very pleasant couple of hours in the "Delicious" cafe before walking along the causeway to St. Michael's Mount. 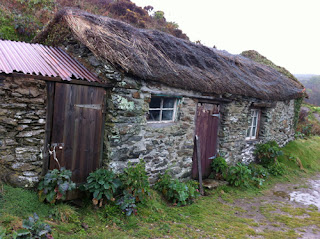 I can't believe we are on the path again. Having not been at all psyched up for this, as soon as I got on the train I began to feel excited again. Even though the weather today is hideous, I don't feel disappointed because I still achieved what I wanted to last year, despite the weather. 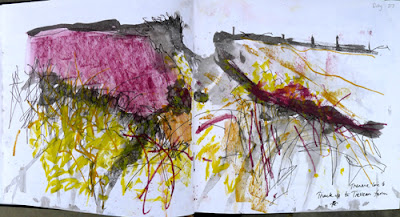 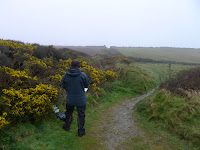 Did a couple of sketches, pretty much ruined by the rain, but the action of doing is more important than the results.
Sketched Perran Sands from Maen-du-point and a track from Trevean Cove to Trevean Farm.


After a breezy and very muddy traverse of the cliffs from Prussia Cove to Praa Sands we arrived at landscape painter Margaret Deans' house for the night.

Big thanks to Margaret, for looking after us - the view from her house is amazing!
http://www.margaretdeans.co.uk/
Posted by Anita Reynolds at 10:41