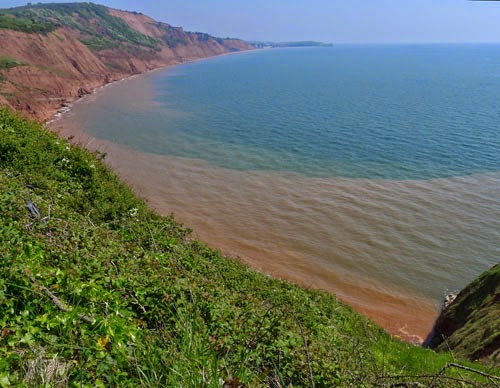 Exmouth to Ladram Bay
10 miles
Word of the day: Stacks

Leaving Exmouth we passed the monument marking the start of the Jurassic Coast World Heritage Site - a slender pyramid of Portland stone inlaid with rocks from the various geological eras present on the coast. Having skirted the bustling Sandy Bay holiday park the simple act of going through a gate in a hedge takes you to another world of impressive sandstone cliffs and pastoral farmland. 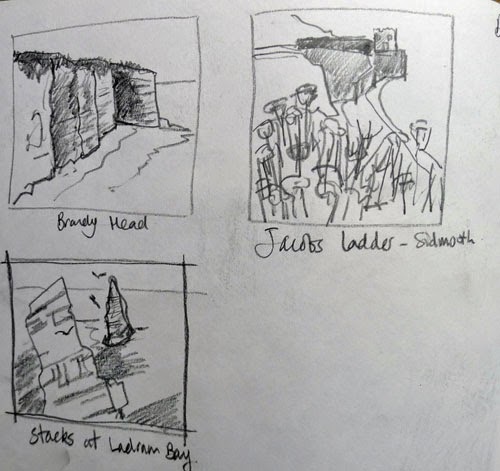 I stopped to sketch above Littleham Cove, and then we dropped down into Budleigh Salterton for lunch on the pebbly beach (pebbles originating from the bed of a river flowing from Normandy millions of years ago - apparently). The transition from caravan park to cliff seemed to reawaken my creativity which had been sadly lacking over the previous couple of days whilst walking through a number of seaside resorts. 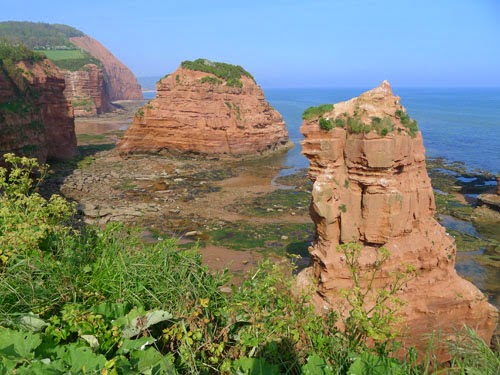 Having walked half a mile inland to cross the River Otter I stopped later to sketch Brandy Head. Walked on to Ladram Bay with its amazingly sculpted rock pinnacles. Slogged up to the top of High Peak (508 ft) before dropping down to Lower Pinn Farm for the night. Liz very kindly ran us down to the Kings Arms in Otterton for a lovely supper.
Posted by Anita Reynolds at 18:15