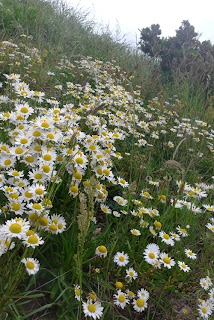 8 miles
Word of the day: Oysters

We started this week with a bus ride, just a 5 minute walk to Shinners Bridge and an hour later we were sipping mugs of tea and munching bacon butties at Cap'n Jaspers on the Barbican in Plymouth. After a short ferry ride we arrived at Mountbatten and donned full waterproofs and rucksack covers, only to remove it all again half an hour later when the sun came out. The grumpiness engendered by yesterday's frantic preparations, a late night and an early start were soon banished by the warming rays! First wet and warm, now dry and warm!

Stopped to sketch the greenfinches on Staddon Heights, just below the huge wall built to distract German bombers during the war. It didn't work - Plymouth city centre was flattened to such an extent that the whole lot was demolished and replaced in the 50's.

The quiet was broken by the disembodied pipes (tannoy announcements) drifting across the water from the type 23 frigate anchored nearby - a steely grey war canoe reminding us of Plymouth's primary role as the biggest Naval Base in Western Europe.
Stopped for a lovely cup of Owen's coffee at Wembury Beach, served by Steve. After a lunch of lentils and ham amongst the rockpools we stopped at Season Point to sketch the foxgloves with the Yealm Estuary and Mouthstone Point in the background. 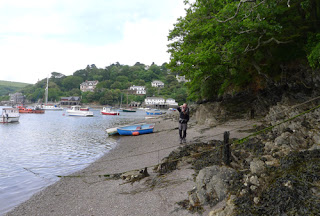 We took the ferry from Warren Point to Noss Mayo and sat on the foreshore admiring the oysters that had taken up residence in every crevice, even amongst old lengths of chain piled on the beach. A short walk through lush woodland and up Revelstoke Drive brought us to Cellars, the home of Sue Spooner and her sister Penny. We spent a very comfy night in the garden room, admiring Sue's colourful textiles.
Posted by Anita Reynolds at 17:51