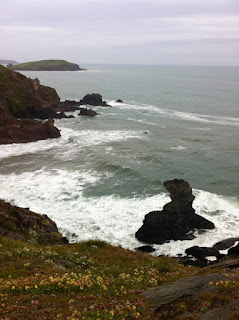 Despite a dire forecast we set out hopefully and, in the end, were amply rewarded. The dramatic cliffs and coves between Wonwell and Bigbury were even more atmospheric in the wet and misty conditions. We passed a rock stack that looked just like a seal pup! 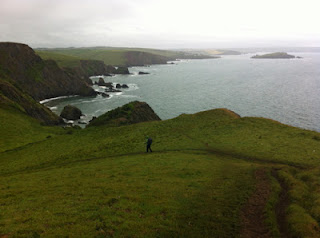 Took some shots of multi-coloured slate cliffs at Hoist Point and had tea in Ayrmer Cove. Other hopeful people were preparing for a soapbox derby in Challaborough and by the time we reached Bigbury it was warm and almost dry.

The Avon ferry doesn't run on a Sunday so we were very grateful when fellow printmaker Diana Miller drove us round to Bantham - saving us an 8 mile walk to Aveton Gifford and back. My boots leaked badly today! Stopped at Warren Point near Thurlestone to sketch the rocks and flowers but the unseasonably cold weather got the better of me and we had to repair to the Beachhouse at South Milton for more tea. 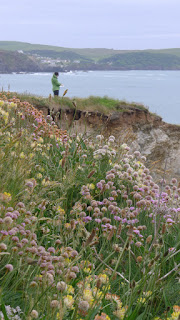 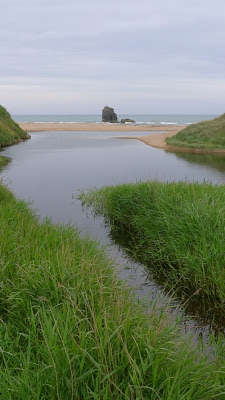 A 2 mile diversion brought us to Hope Cove and a comfy nights stay with our friend Mary Northcott.
Posted by Anita Reynolds at 18:11